With the kids off from school and playgroup last week, I was glad to fit in a few bike rides, although as always, I would have liked to have done a bit more.

Tuesday was an odd day, as Pete had the week off work too, but I had to go to work in the afternoon. It seemed very unfair, but meant that I could go to the gym in the morning while he looked after the kids. I went at about 8am, and did my longest session on the cross trainer yet - 45 minutes. God, it was boring, even while watching tv. I keep getting pins and needles in my toes while I'm on this machine - does anyone else find this? It'a a bit off-putting.

After that I got on the recumbent bike for 15 mins then had a wander round the weight machines. I don't really know what I'm doing with those, so I need to decide some sort of routine. Then I rolled my achey legs on the foam roller just for fun (if pain = fun).

On Wednesday I was busy in the morning, and Pete's parents were due after lunch, so I just put in a quick bike ride at about 8am. I only had time for 30 mins, but I'm finding that going for shorter, faster cycles is reviving my enjoyment a bit - I was getting fed up on a lot of longer rides, especially as they all seem to culminate in long uphills.

Then on Thursday it was time for an appointment with Ms Physio, so I cycled there and back, which was about 6 miles altogether. I had been feeling quite positive about my heel, until Weds evening, when I had a lot of pain, almost enough to make me limp. I think that was caused by a lot of standing, as I spent a long time cooking and cleaning up (see in-laws' visit). It doesn't bode well for the chances of me running any time soon... sigh...

On Friday I didn't manage to fit in any exercise, other than swimming with the kids (in which I probably swam about a length in total), and neither did I do anything on Saturday. Yesterday though, I had a rather nice cycle. 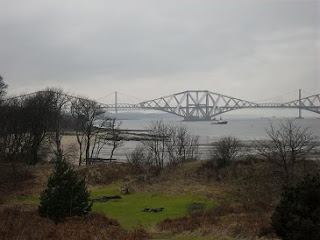 View from the path

I went through my favourite country estate, downhill towards the coast, along to the High Street for 5 miles, then turned tound and went back the same way. This was an oh-so-clever trick to force myself to complete 10 miles without cutting it short.

In fact I really enjoyed it. Despite the grey skies, there was no rain, and the views were quite impressive, if a little bleak! 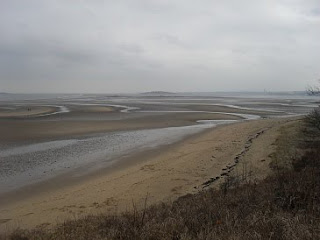 Deserted beach (although it's not much different in August)

Bets of all, I cycled up the hill at the end - this was the hill that I last cycled up on 31st of January, and had to walk a part of it. That was after flu and a few weeks off from exercise, but I hated not being able to cycle all the way. Yesterday I was back to normal fitness, as I puffed and panted, but didn't get off the saddle. Hooray!

So 21 miles cycled this week - I am increasing the amount each week since I got back into it - and only 1 trip to the gym. It's back to school tomorrow, so I'll be looking forward to a few more opportunities to get out, and hoping that the weather stays dry for a bit, maybe even with some sunshine at last? Please?! 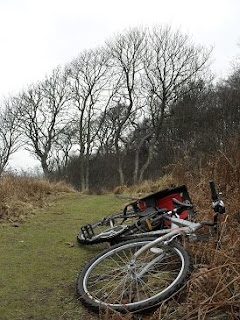