1. Run a race with an injury that needs rest.
2. Run a race in brand new trainers that have never been run in before.
3. Run a race while drinking a drink never tried in training.

I went back to Ms Physio today after a week of on/off pain, and my heel not really getting any better. She massaged it with hands and then ultra-sound thingy, and then she strapped it all up again like last week. She asked if I was still planning to do the GNR, and I said yes. She didn't advise me not to, and she didn't even look disapproving, but she said I should make an appointment for Monday, as it will probably be sore after the run.

Good news now, and I bought some new trainers! Woo! Obviously I haven't been able to run in them yet, but I have been wearing them round the house a lot. 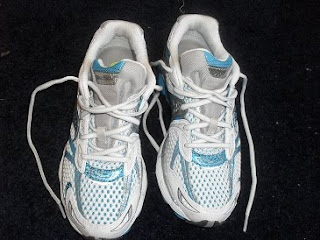 Check out these beauties... 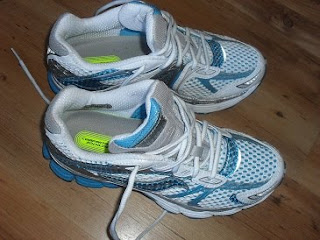 The drink thing is less of a problem, although I meant to try it on a couple of long runs. The other long races I've done provided Lucozade Sport (orange flavour - not bad), but in Newcastle, we get Powerade. Luckily, they sell it in vending machines in the College where I work, and I often see students drinking it during classes. Why they think they need an isotonic sports drink to sit at a desk for 2 hours I can't imagine. None of them even take the stairs to class... I tried it today, and it tastes about as good as it looks. 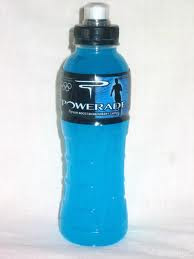 Anyway, I've decided I have to do the GNR as it's a once in a lifetime opportunity, and I don't suppose I'll get a place again (it's a ballot entry). I'm going to go for the atmosphere and the experience, and aim to get round at a decent jogging pace, spotting as many celebrities as I can.

The sub-2-hour half marathon will one day be mine - not yet, but eventually!