I was feeling pretty positive this week after last weekend's fantastic run, and I tried to push myself to run fast on Tuesday and Friday's 5ks and Wednesday's 6-miler with Jog Scotland. I think I've made some good progress with my pace recently, and I wanted to keep it going. They were all good runs, and I also fitted in a 9-mile cycle on Friday morning, which was really nice.

Then on Saturday evening, I had runs of a much less pleasant sort which, suffice to say, meant that by the time I got up to run my LSR on Sunday morning, there wasn't much fuel left in my stomach! I had breakfast though, and headed out with a plan to do about 14 miles. At 2 weeks before the GNR, this should have been my highest mileage, and last long run before a taper from next weekend.

I was quite tired, having had a few nights of disrupted sleep (courtesy of my darling daughter), but the first few miles went pretty well - around 8.50 min/mile pace. I wanted to average around 9 minute miles to get near 2 hours for 13.1 miles again.

Anyway, I started feeling heavy legged and sluggish around the 5th mile, and during the 6th mile, I had a bad stitch, so I stopped to walk for a bit, and swig some water. I started running again, but I felt tired and it seemed to be such an effort to keep going. I decided to cut the run short, and aim to complete at least 7 miles before walking home. I had to force myself to keep going for a while, but when I reached 7 miles I felt a bit better, and decided to run, rather than walk home.

When I got home and stopped the Garmin, it read 8.5 miles - considerably less than the planned 14. However, I felt philosophical about this apparent failure. I'd been missing a lot of sleep, and after the tummy trouble as well, it wasn't that surprising that I didn't run well. Despite a couple of stops to walk and jogging slowly at the end, I still averaged 9.11 mile pace. I still felt confident that I could get my sub-2 hours in the half.

As I cooled down, I became aware of pain in my right foot. I'd noticed this in a previous run, but only as a slight niggle, and while running, it was only a minor complaint. But after I'd had a bath and got changed, I realised how sore it was. It hurt to put weight on it, and I was walking with a limp! It didn't get any better yesterday, and so today I went to see the Doctor. He told me what I had already worked out from running books and websites - plantar fasciitis.

What a cliche - a typical runner's injury! As I haven't suddenly increased my mileage and I'm not overweight, I wondered whether my trainers might be at fault. Luckily, I've been recording all sorts of boring information (like the purchase of new trainers) in this blog, so I looked back to check how old they were, and found that I'd bought them in March. When I checked my Garmin stats, I saw that I've run nearly 450 miles since then, so they are probably in need of replacement.

So, what now? I've got a physio appointment on Wednesday, so I'll see what she says, but I definitely won't be running this week at least. Hopefully I can recover enough in 2 weeks to get to the start line, but I'm not sure about getting to the finish. At least I can look forward to a trip to the running shop for some shiny new ASICS.

Meanwhile, I'll be trying to keep weight gain and loss of fitness at bay by getting on my bike. Now Emma is at playgroup, I have 2 free mornings a week, and last Friday I used the time to cycle through the grounds of a nearby country house. It was really enjoyable, so I hope I can do more of that in the next few weeks. Time to focus on the positives... 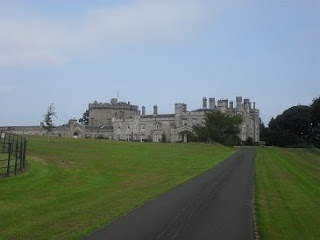 Dundas Castle as seen from my saddle 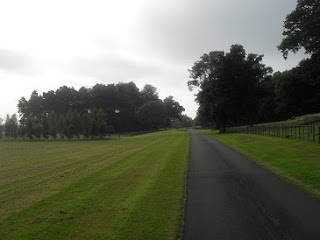 The path through the grounds
Posted by Liz at 15:55