I'm talking about races of course.

When I got the opportunity of a place in the Great North Run, I was quite excited, and felt it was something I couldn't pass up. As a race with a ballot entry system, I knew it would be hard to get a place again. This was by far the biggest race I've ever been involved in - 54,000 runners, the biggest race in the UK, the biggest half marathon in Europe etc. I've watched the live coverage on tv a few times over the years, and knew I'd want to do it one day. (Of course I couldn't know that I'd be running it with an injury and a limp...)

So my expectations on Sunday were pretty high - not for my performance, but for the experience of doing this particular race. However, it ended up being a bit of an anticlimax, and I've found myself wondering why. Here are some of my reasons:


Why bigger isn't better
1. Accommodation - by the time I got my place at the beginning of June, all nearby hotels and B&Bs had been booked up for ages. The nearest we could find was over 30 miles away from the run, and it was still full of runners!

2. Traffic - there was a lot of it all weekend. Pete had to drop me off near the start very early to beat the jams, and then when he tried to drive to the finish, he kept having to turn back as a lot of the roads were closed for the race. We also had a bit of a queue to leave the car park afterwards.

3. Congestion - the run itself was insanely busy. For the whole 13.1 miles it was difficult to get past other runners, and there was an lot of elbowing out the way going on. It was also really hot from the heat coming off of other runners! 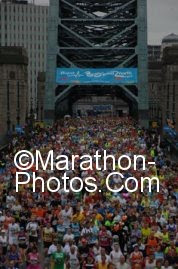 Apparently I'm in this photo!

4. Inexperienced runners - I don't want to sound like a running snob, and I'm aware that I'm not exactly a serious athlete myself, but the trouble with people who don't run year round in other races is that some of them seem to stop and walk just after the first mile marker. Obviously that's fine - some people walk the whole thing - but if you're going to start walking at mile 1, don't start the race in a pen with people aiming to finish in 2 hours! I couldn't believe how many walkers I had to dodge so early on, especially with it being so crowded.

5. The finish - it was so busy and we were shepherded from one place to another. I wanted to go back down the course to meet Pete and the kids, but spent ages trying to find the way out. Different officials gave different directions, and eventually I had to run across the race, which was still full of runners.

6. Cost - ok, so I didn't actually pay it as I had a charity place, but big races charge some ridiculous prices compared to smaller ones. Charities often put a huge minimum amount of sponsorship that you have to raise too, and of course it's difficult to get an entry without finding a charity to run for.

Some good points
1. The crowds - for me, by far the best thing about bigger races is the fantastic support. I don't think there was a single stretch of this race that wasn't lined with crowds cheering us on, giving out sweets, food and drink, spraying the runners with a hose etc. They can really make such a difference, so thanks to you all!

2. The goody bag - I suppose you get what you pay for, but at least after a big race you usually get something to refuel with, a medal, and a t-shirt. I like to get these mementos to remind me of the day. 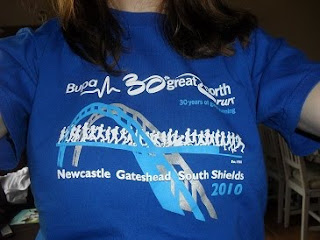 Featuring the Tyne Bridge, which was the best part of the run.

What do others think? Big events or local races? Whenever my foot allows me to, I'll be looking for some smaller runs next - no more than 500 runners if possible!
Posted by Liz at 17:50