On Saturday morning, I went to Tesco to get some lunch, and my foot was so sore when we left, I was seriously considering not going to the race. But I knew how depressed I'd be to stay home and watch it on tv, so we bundled into the car and headed south.

The drive down was very slow and frustrating - no motorway, just busy A roads. Some of the scenery around the Scottish borders and Northumberland was stunning though. Anyway, we got to our hotel after about 3 hours. Despite being about 30 miles from Newcastle, it was full of runners. The nearest accommodation is probably already booked up for next year's run.

The restaurant in the hotel was all booked up, so we went just down the road to a Pizza Express - probably my favourite big chain restaurant. We all had pizza, the kids were quite well-behaved, and I also had chocolate fudge cake and a lovely glass of white wine. No point worrying about race preparation when your foot is buggered! We all went to bed at about 9.30pm, although I had a very restless night with not much sleep.

Sunday morning the hotel was doing breakfast from 5.30am to accomodate the runners! That seemed a bit over the top though, and we wandered in at about 7am. I had 2 bowls of cereal, tea, orange juice and 3 croissants (it was 'all you can eat'). We got to the car just after 8am, and popped to the supermarket for painkillers and safety pins, which I'd forgotten.

Pete dropped me off in Newcastle at about 9am. It was raining quite consistently, and was fairly chilly. I had no idea where I was, but just followed the crowds of runners. After about 20 mins of walking, my foot really started to hurt, so I slowed down a bit. I must have walked a couple of miles or more to the start. It was about an hour to start time when I got there, so I had plenty of time to queue for the delightful portable toilet. Everyone was coming out saying 'Ugh, just don't look down'. It was disgusting.

Anyway, there was good entertainment at the start as the announcer was really good. Eventually we started to shuffle forward in our pens, and I got to the start after about 20 mins. A quick look at Ant and Dec and I was off! I was so nervous, as this was the first time I'd tried to run since I hurt the foot. I had a funny limping gait at first, but as I got into it, it felt ok. The crowds were huge and the atmosphere was good, and I couldn't believe it when we got to mile 1 - it flew by!

I'd rubbed ibuprofen gel into my foot, and taken a couple of Nurofen, and I think that helped with the first few miles. My pace was around 9.30 min/miles, but I think mile 2 was 8m54s, so it wasn't all too slow!

In fact I was feeling ok. After mile 4, my phone was ringing, so I stopped to a walk while I spoke to Pete and reassured him that I was still able to move. I carried on feeling fine, and when I got to a sign which said 'Half Way Point', my Garmin said 1h01m. I was amazed, and started to think I could get a good time after all! I surged forward, and ran a really fast mile and a half.

But somewhere around 8 miles, I started to feel tired. It wasn't just the foot slowing me down, but I felt undertrained, having not run at all for 2 weeks. Then someone turned off in front of me, and I tripped over his leg - with my bad foot of course. It started to hurt straight away, so I soon stopped for a drink and to take more painkillers.

I walked a few times in the next few miles. Eventually I got to the 12 mile marker, and there was Pete and the kids! I waved, and did something I never usually do in a race - stopped for a chat! I must have been there for about 2 mins, then pushed off, and tried to speed up towards the finish. It was still so crowded though - it was hard to get past people.

As I crossed the finish line, I slowed to a walk. I really didn't care about my time, and I haven't looked it up online yet. My Garmin told me that it wasn't good - but this race was about finishing, not getting a PB! (It was a Personal Worst actually).

Anyway, I got my medal and my t-shirt (which is quite a nice one), and I made it. This morning my legs are really aching, and my foot is quite painful, but not as bad as I'd anticipated. I'm off to see the physio, and then I think I'll be out of running for a while... a shame, because this run reminded me how much I love it! 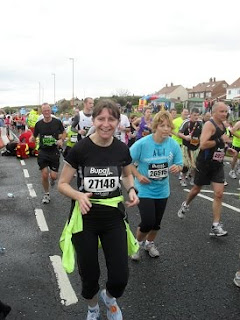