After 6 months of tedious injury that stopped me running, I want to do whatever I can to prevent the same thing happening again. But what exactly should I do? When I started getting heel pain, I went straight to my tried and very trusted physio, but for a long time we didn't seem to make any progress. She spent a lot of time working on my lower back, which she pinpointed as the cause of most injuries, and we tried local massaging, taping, and eventually orthotics.

I didn't notice any obvious improvement, until February this year, when I managed a few runs without any heel pain. Great news, but I am none the wiser about what helped the recovery.

Since then, I've been continuing with a few stretches that Ms Physio gave me, along with loads of others I've got from the net (mainly from other bloggers). I've also continued to not cross my legs when I sit down, to wear shoes all day and hardly ever go barefoot, and to wear the orthotics at all times. But I don't know if any of this is actually helping.

Recently I've had a lot of discomfort and pain in my feet - in the tops, not the heels - of which I really don't know the cause, and after the last few runs, there has been some slight reoccurance of the dreaded heel pain. I really can't stand the thought of not being able to run again, and Pete has said he would find it hard to put up with too - apparently my usual sunny demeanor was replaced with some grumpiness, although I find this very hard to believe.

I've been reading on various blogs about barefoot running and minimalist shoes, and while a large part of me (my brain?) thinks that this is just the current fad and in a few years it'll go out of fashion, I have found some of the things I've read quite convincing. For example, I can see that strengthening the foot could help prevent injury, and that this is not going to happen by constantly protecting it in highly cushioned shoes. I also feel that heavy heel striking might not be the ideal running style for my injury-prone heels.

So I'm beginning to wonder whether my orthotics are doing more harm than good. Could they be causing the discomfort in the top of my foot? And what sort of shoe should I be wearing?

With all these dilemmas in mind, I paid a visit to the running shop this week. I didn't know if I wanted a more cushioned shoe, or something more minimalist. I've found that my last pair of shoes (Saucony), have been pinching my toes, and I don't find them very comfortable.

Anyway, I spoke to the guy in the shop about all my issues (poor man), and he videoed me running on the treadmill and showed me my many running faults. I ended up with a softer, more maleable shoe, which he thought would help correct my wonky gait.

This is the first time I've ever bought new running shoes and not thought that they were a thing of beauty. Behold, the monstrosity: 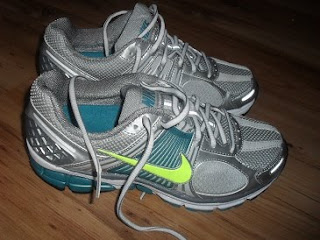 Actually they don't look too bad there, but look away from the next picture if you are of a sensitive disposition: 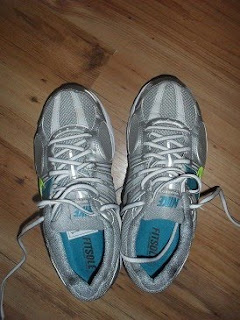 AAARGH! So I tried them out on the treadmill this morning and they felt very comfortable, but afterwards I had a few pains in the side of my right foot. That didn't last long though, so I think I'll probably keep them. I'm still confused, so I guess I'll just play it by ear for now.

(Apologies to anyone who has these Nikes and loves the look of them).
Posted by Liz at 20:39