I had a great time this morning! This was a really enjoyable race, despite the very undulating course and some patches of mud, and I can't wait to try another trail race!

I was a bit concerned yesterday, as it rained constantly from about 11am until the evening, so I thought the course would be very muddy and slippy. In fact there were only a few muddy parts, and my trainers came away pretty unscathed. The weather this morning was fine, although quite cool, and I couldn't decide whether to leave my jacket on for the race. In the end I left it off, and of course I was warm enough after a mile or so. 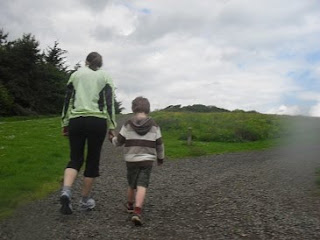 Heading up to the start

I'm not sure how many runners started, but it looked like over a hundred, and we started on time with a bagpiper playing us up the hill. I positioned myself at the back, and didn't hear the starting whistle, but suddenly everyone was off.

Within about 2 minutes, I was at the back of the field, and the majority of runners were already a long way in front. This was mentally quite difficult - in popular road races I'm used to being in the middle of the field with plenty of people behind me, but this race I was ahead of only about 20 runners. There was a very strong temptation to go too fast and try to keep up, but I tried to reign it in and stick to my own pace. I found it quite tough, but after a mile or so, I was really only aware of a few men behind me and a woman just in front. 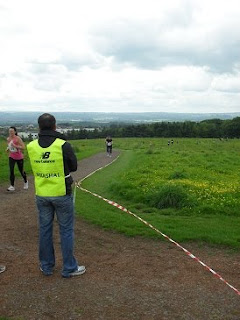 As we got to the top of this hill, you can see a lady in pink, who had overtaken me, and I am in black behind. Just behind me was a woman in a brown t-shirt, with whom I battled throughout. She walked on the steepest uphills (including the bottom of this one), but then caught me up on the downhills.

Anyway, I managed to look happy, even after this hill: 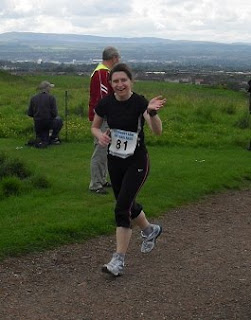 It was an extremely hilly run. There was no real flat, it was all up or down hill, and some of the hills went on for ages. I found that I could overtake or increase my lead over the brown shirted woman on the uphills, but she would catch me up on the long downhills, where I got a stitch. At two points, we had to cross a footbridge over the motorway, and the bridges were very steep. I stopped to walk as Ms Brown came up behind me, but then she stopped as well.

We kept changing position, but the woman in pink pulled away from me about 3km before the end, and I couldn't catch her. In fact the last few kilometres were quite tough. I had no idea what was coming next (it was generally hills), and the km markers seemed out of time with my Garmin. When I saw '1km to go', it gave me a burst of energy, but then we had to go up a long hill, and it seemed like a very long kilometre.

Finally we reached a peak, and I saw the finish line at the bottom. I charged down as fast as I could, leaving Ms Brown in my wake - ha! I crossed the line, and checked my Garmin. As I had seen during the race, this was not 10k. I had only run 5.8 miles - 9.3km. My time was 54mins34s! 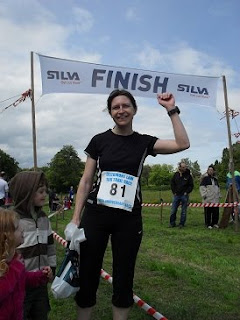 Considering the course, I was quite pleased with an average pace of 9m23s per mile, and I'm not too bothered about the course being short, as I wasn't taking it particularly seriously as a 10k. After the finish line, there was a table of goody bags, and then some drinks, and the all important clootie dumpling! This is basically a spicy fruit cake - it was a great post-race snack, and you can read more about it here if you wish! 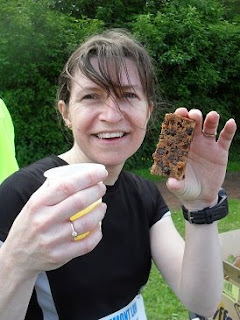 Also in the goody bag was a token, saying that I had won a spot prize! I was quite excited about this, especially as I knew I wasn't going to win any prizes fro running! We went to the prize table where you could choose from a selection, and there were a lot of people there - Pete pointed out that it seemed that everyone had received a token! Anyway, I was quite pleased to pick out a fuel belt: 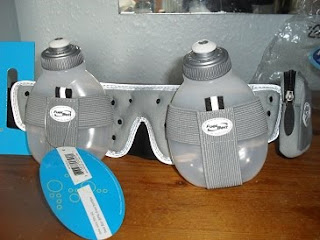 We also were given a 'race memento', which turned out to be a small dish, engraved with '10th Anniversary DECHMONT LAW 10K 12 June 2011'. Not the most exciting race bling perhaps, but a nice souvenir.

So it was good fun, I really enjoyed racing, but I felt utterly shattered afterwards. I would definitely recommend this race, and with its friendly atmosphere and organisation (apart from the measuring), I would do it again.

Huge thanks to Pete and the kids, who clapped and cheered me on, and Pete did a great job as race photographer too. I definitely must do more trail races! 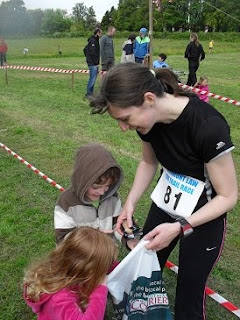