Well I just typed this all out once and accidentally deleted it, so I'm going to be brief now!

I had a couple of good runs and a really enjoyable bike ride, despite being quite busy with getting the house on the market. 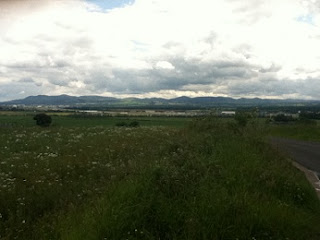 Views from bike over the airport to the mountains

On Friday my parents arrived, and on Saturday, Pete and I went to our neighbours' wedding. They got married North of here, so we stayed the night in a B&B, while Mum and Dad looked after the kids at home. The wedding was perfect for us coming to the end of our time in Scotland, as it was very traditional. It was held in a castle, most of the men wore kilts and traditional dress, there was a ceilidh band with a caller (who tells you the dance steps), and Pete and I joined in with a few Scottish dances. It was fantastic.

The only downside was we stayed about 1.5 miles from the castle, and there was only 1 taxi in the village! So we walked there and back. That would have been fine, but I was wearing shoes with a heel, which I am so not used to. What with the walk and the dancing, my feet are still in shock now.

The worst thing that happened last week was that my bike got stolen. It was such a shock, as we live in a very safe, quiet village, and we've never had any problems before. It was in the shed in the garden, but the lock has been broken for about 4 years, so it wasn't secure. It's so frustrating as it isn't worth much money to anyone, but it was important to me, as I used it so often.

I've reported it to the police, and I'm hoping it might turn up, but it's unlikely. So no more bike rides for a while, and I suppose I'll be doing more running to make up for that. 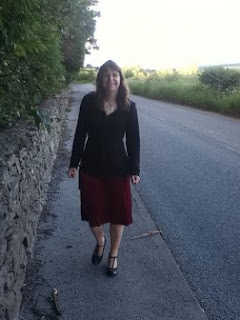